a journey of a thousand rabbits

The idea of a solo art show arose after I read a blog, “The Folklore of Rabbits and Hares” by Terri Windling (“Into the Woods series, 43”) in February 2021. It discusses the prominent role of rabbits in cultural myths and religions all over the world.  Often inspired by nature, it was easy for me to take the leap and represent the rabbits of myth, pop-culture, literature, religion, and fable, in my art.

Rabbits appear so frequently in cultures around the globe that one begins to wonder if the adage of “breeding like rabbits” isn’t as much figurative as it is literal. Asian cultures, Indigenous cultures, old world religions and New Age beliefs all feature rabbits as central figures in some of their myths (Asian and Indigenous cultures have “rabbit in the moon” stories, for example. Pagan religions naturally used the rabbit as a symbol for Spring and fertility and Christians co-opted the pagan rabbit for their Easter celebrations.) Children’s literature, often used to teach morals and values such as we see in Aesop’s Fables The Tortoise and the Hare, employ the rabbit to help drive the message home. The African Uncle Remus tales of Brer Rabbit (now controversial with concerns over overt and covert racism) were brought over to The United States by African Americans captured in the slave trade and written down by Joel Chandler Harris. The Adventures of Peter Rabbit by Beatrix Potter, Through the Looking Glass  by Lewis Carroll, Watership Down  by Richard Adams all have rabbits playing prominent roles and were integral literature for most of us growing up. As Americans we grew up with “The Energizer Bunny” flaunting his ability, to keep “going and going and going” and many of us “Boomers” can still recite the “Little Bunny Foo Foo” song by heart. Decades later, my family still sings “ABC Bunny” of our childhood. “Ah, what’s up doc?” is a familiar phrase uttered by Bugs, an animated Warner Brothers trickster bunny, precursor to Disney’s Roger Rabbit of Toon Town. Many of the aforementioned Leporidae are featured in my show, including rabbits drawn and glazed as Mexican alebrijes (animal guides in the afterlife) and fetishes, but not all of them are. I had to draw the line somewhere. Still, La Galería @ The Shaffer features dozens of different representations of the universally beloved furry critters.

Which brings me to the sub-title of the show, “a journey of a thousand rabbits.” Apparently, there is an Asian tradition in pottery making that says, something like, “the pot maker makes her first pot only after she has first created 1,000.”  As I worked in clay, paper, and a new medium for me, linoleum block printing, I came to see the truth of the statement. Where once I struggled to achieve the rabbit figure I desired, now the rabbits practically reproduce themselves. 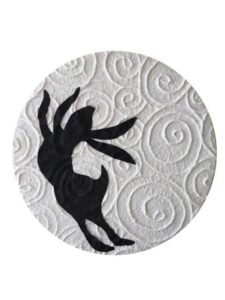